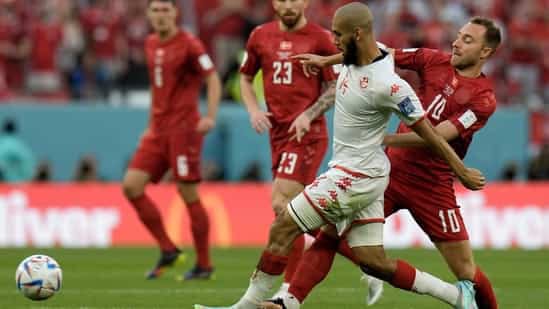 After a good opening game against Denmark that ended in a stalemate, Tunisia has the opportunity to build on the result against Australia, considered the ‘whopping boys’ on paper in Group D of the 2022 World Cup.

The match counts for the 2nd day of Group D of the 2022 World Cup and it will be played at the Al-Janoub Stadium.

The Carthage Eagles making their 6th participation in the world cup finals – put up a good show against Denmark on match day 1, despite Denmark being the favorite on paper.

Jalel Kadri’s men showed a lot of desire and intensity but they lacked composure in front of goal.

Now jalel Kadri and his charges face Australia, presented as the least successful of the group on paper.

Australia qualified after an intercontinental play-off against Peru and they were swept aside by via a four-one margin despite having taken the lead Tuesday.

A victory for Tunisia would offer them a real chance of making the rounds of 16 against ‘les Blues’ on the last day.

After a scintillating performance against Denmark, changes will be limited in the starting lineup in the Tunisian side. Coach Kadri could still plan to go with his backline of 5 at the back, with the goal protected by Dahmen.

On the other hand, Ben Slimane could give up his place in the midfield in benefit of Sliti, with a more offensive profile to accompany Laïdouni and Skhiri.

Jelel should renew confidence in the attacking combo of Jebali-Msakni.

On the Australian side, Leckie and Goodwin who respectively assisted and scores against France, are expected to start

Tunisia lost its first game against Australia in 1997 (0-1), before winning the next in 2005 at the Confederations Cup (2-0).German referee Daniel Siebert will officiate during this match. Tunisia is 30th in the FIFA rankings, Australia 38th. France and Denmark will meet at 5 p.m. in the other meeting of this group D.