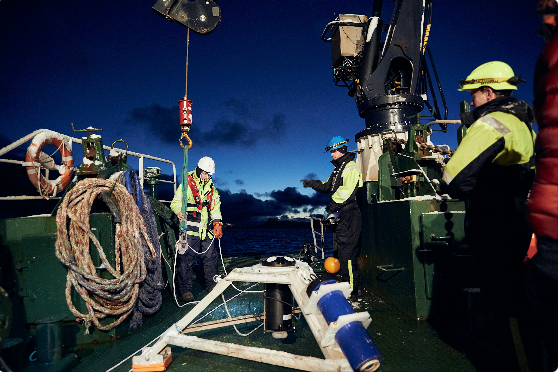 A new study has documented the first simultaneous observations of waves and currents in Norway’s Lofoten Maelstrom – one of the world’s strongest open-ocean tidal current systems. The observations, born out of a collaboration between the Norwegian Meteorological Institute, the Norwegian Coastal Agency and Nortek AS, will help make fishing and seafaring in the area safer.

The Lofoten Maelstrom is famed for its powerful waves, eddies, whirlpools and fast-flowing currents that have wrecked ships and put seafarers in grave danger for centuries. It also inspired stories such as Jules Verne’s Twenty Thousand Leagues Under the Sea and Edgar Allan Poe’s A Descent into the Maelström.

Generally, current speeds of two meters per second are classed as exceptionally fast. In a study published in the Journal of Physical Oceanography, the authors recorded speeds of up to three meters per second. The authors believe that currents are even faster in other parts of the Maelstrom.

The authors gathered a unique dataset of simultaneous observations of waves and currents and observations of bubble depth using a Signature500 current profiler (ADCP) made by Norwegian ocean high-tech company Nortek. This advanced acoustic instrument is capable of “seeing” the ocean in three dimensions.

“It’s very rare that you get simultaneous observations of waves and currents, especially where you have such a strong tidal current,” explains co-author Trygve Halsne, scientist at the Norwegian Meteorological Institute and PhD student at the University of Bergen.

Understanding the way the ocean moves helps seafarer and fishers

Using observations recorded with this advanced acoustic technology, the researchers estimated wave height and the speed and direction of the currents. They found wave breaking to be particularly vigorous when the waves traveled in the opposite direction to the currents.

The observations also revealed a more unusual phenomenon – strong wave breaking when waves and currents travel in the same direction.

“When you talk to people like fishermen, they always say it’s when the current is opposing the waves that you get the strong breaks. However, we also saw strong breaks when the waves and currents moved in the same direction,” says Dr Øyvind Saetra, deputy head of the Norwegian Meteorological Institute’s division for Ocean and Ice, and lead author of the study.

The data can be fed into models that drive metocean (ocean and meteorological) forecasts. Seafarers and fishers can use these forecasts to plan their activities to avoid the most dangerous conditions.

Click to read the full press release about the work being done to improve metocean forecasts with wave and current data from an extreme ocean environment.

Moskstraumen, one of the world’s strongest open-ocean tidal currents, lies in the Lofoten archipelago in the north of Norway. (Photo: Raymond Engmark)

We pride ourselves on being innovative in product development and production processes. Nortek provides solutions to engineers and scientists by offering real-time data collection and support from our responsive technical team.

Nortek’s headquarters are just outside Oslo, Norway, where R&D, product assembly and other main functions are situated. In addition, we have subsidiaries in the US, the UK, China, Japan, Australia, Brazil, France and the Netherlands.