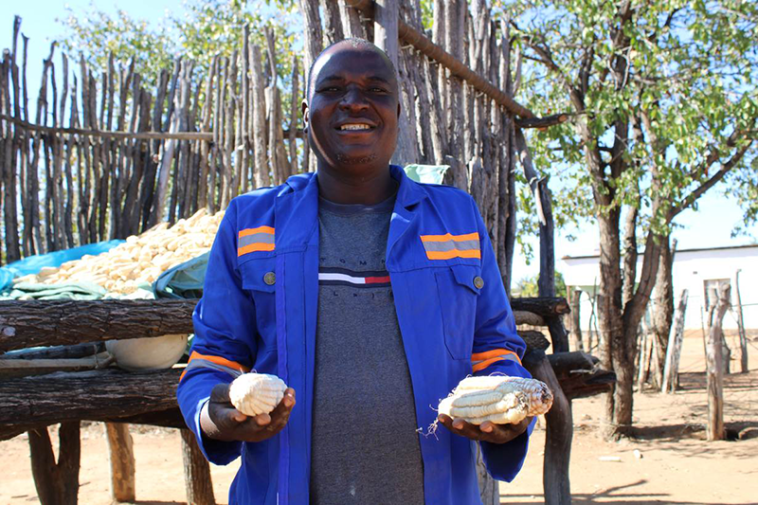 BUBI: Standing next to her traditional wooden maize store in western Zimbabwe, farmer Lindiwe Ncube gestures towards the empty compartments that spell trouble for her family’s future.

Last June, all five were stacked with sizeable maize cobs ready to sell. This year, only of them is just about full after a mid-season drought ruined the harvest, leaving the 49-year-old with barely enough to feed her own family.

“This season is bad, it is a season of hunger,” Ncube told the Thomson Reuters Foundation at her home in the village of Alfalfa in Bubi district, near the nation’s second largest city Bulawayo.

“The maize cobs are small and I only managed to have four bags (weighing 50kg each). I will not be selling anything.”

Climate change is bringing harsher and more frequent drought to Zimbabwe, threatening the staple maize crop. At the same time, efforts to adapt are struggling as the country contends with an economic crisis compounded by the COVID-19 pandemic and war in Ukraine.

Farmers in the southern African nation have in recent years turned to climate-smart practices such as reducing tilling and using water-saving drip irrigation, with some growing drought-hardy grains such as sorghum.

However, Zimbabwe’s maize production is still expected to fall by 43% in the 2021-2022 season due to poor rainfall, a government assessment found in May.

Farmers have been ordered to sell their harvest to the state to replenish national stocks. But many are holding onto their harvests because of poor yields and low prices offered by the state Grain Marketing Board (GMB), the Commercial Farmers Union said.

Officials at Zimbabwe’s land and agriculture ministry did not respond to requests by the Thomson Reuters Foundation for comment on the situation.

But the GMB and land ministry recently announced cash incentives to try to encourage farmers to deliver their maize to the government.

The United Nations’ World Food Programme said in January that more than 5 million Zimbabweans – a third of the population – were facing hunger, and fears are rising that the government order to sell maize will only make things worse as people struggle with soaring living costs.

“This year there is trouble,” said Ncube, who last season sold 50 bags of maize to the GMB for 64,000 Zimbabwe dollars ($174) – enough to pay for a modest new house and her children’s school fees.

Now, “my children will be turned away from school because I have not paid their fees,” she said. “I will have to do odd jobs like cleaning someone’s yard to raise money.”

GOING AGAINST THE GRAIN

Last month, the government told the GMB to ensure farmers sell their maize harvest to the state, after production for the 2021/22 season was projected at 1.56 million tonnes, down from last year’s record of 2.72 million tonnes.

Zimbabwe generally requires 2.2 million tonnes each year for human and livestock consumption, and officials have said some grain remains in storage from last year’s harvest.

However, later in May, the lands ministry ordered the GMB to crack down on “side-marketing” – referring to unofficial or black market maize sales – after receiving only about 5,000 tonnes of the 30,000 tonnes it anticipated had been harvested.

“Farmers are keeping the little they harvested for their own consumption and for livestock because you cannot sell to the GMB when you cannot buy the grain later,” said Winston Babbage, vice president of the Commercial Farmers Union.

The union said many farmers had also been reluctant to sell their maize to the state due to the low price offered – set at 75,000 Zimbabwe dollars per tonne – and delayed payments.

Some farmers are putting their maize on the black market, where a tonne can sell for more than double the state price.

In a bid to address the shortfalls, the GMB last month said farmers selling maize to the state would receive 30% of their payment in U.S. dollars, seen as more reliable with the Zimbabwe dollar slumping due to inflation.

Earlier this month, Agriculture Minister Anxious Masuka said the government would offer an incentive payment of 90 U.S. dollars per tonne for the prompt delivery to the GMB of maize and other grains.

Harare-based economist Gift Mugano predicted food security would worsen in rural areas if farmers are not allowed to keep the maize they have harvested.

About half of the population is living in extreme poverty according to the latest government data from 2020, he said.

“This means 7.9 million people are living on $1.90 a day and will have difficulty in putting food on the table if you take their maize,” Mugano noted.

Inflation soared above 190% this month – its highest level in more than a year – stirring fears of a repeat of the hyperinflation that wiped out people’s savings a decade ago.

Analysts and aid agencies have warned that rising farming costs caused by Russia’s invasion of Ukraine and by the pandemic could lead to fewer crops being planted and exacerbate a food crisis not just in Zimbabwe but across Africa.

Zimbabwean farmer Bongani Ndlela spent 200 U.S. dollars on seed and fertiliser in the previous growing season but fears this year’s poor harvest will leave him short of cash to plant a crop next season.

“I had anticipated another bumper harvest this year, but poor rains dashed my hopes,” said the 54-year-old. “I am saving my small harvest for my family’s consumption and there is nothing to sell.”

“This year will be hard for me. I will have to sell some livestock to look after my family and settle my bills.”

‘Potholes’ from the past help drought-hit Zimbabwean farmers save water