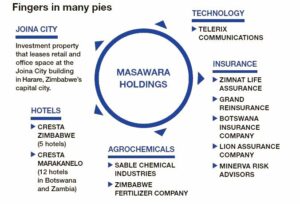 Ayear after the military intervention that forced out president Robert Mugabe, Zimbabwe is at an econ­omic crossroads. With the right policies and commitment to cut back the cost of government, it could muster the international support to break the logjam of its foreign debts and arrears and reboot the economy.

Finance minister Mthuli Ncube has said that the present level of state spending – a fiscal deficit of 11% of gross domestic product that was over twice the 2018 target level – is not sustainable. But he is optimistic that the government can end the foreign-exchange and currency crises with some bridging finance as the government pays off its arrears and lays the groundwork for a revival of sectors like mining and tourism.

That change of direction is critical for businesses leaders like Shingai Mutasa who have ­nav­ig­ated Zimbabwe’s stormy econ­­omic waters for decades. Mutasa has interests across property, tourism, finance and telecoms.

Mutasa sees Mugabe’s 37-year rule as a necessary corrective to the excesses of colonialism, and he regards his successor, President Emmerson Mnangagwa, as a pragmatist. When Mnangagwa “wakes up every morning, every day he has to ask himself what can he do to make the economy better,” he says.

Mutasa says that bridging this perception gap is the urgent task of the new leadership. The world is also going to get better acquainted with Zimbabwe’s entrepreneurial class as sanctions are slowly rolled back, and the government launches plans to access international lending to reboot the economy.

Despite the ravages of ­hyperinflation and a predatory politico-military elite over the past two decades, Zimbabwe sits on a strong economic base. And Mutasa has big hopes for the country: in health, agriculture, mining and manufacturing, he argues the strong human capital and resource base of Zimbabwe can help it to become an economic hub once again. “If we become deadly serious as a country, we can even go beyond the vision of our president to be an upper-­middle class country by 2030,” Mutasa argues.

That will require change from everyone, and the business community is no exception. Mutasa has been forced to re-jig the manner in which Sable Chemicals – which he acquired in January 2018 – operates, ditching its reliance on expensive and patchy electricity to create ammonium nitrate fertiliser.

That has come with its own problems, which Mutasa hopes will be solved by the current regime, in particular, the lack of access to hard currency across the country. In September, Sable Chemicals said it was only able to meet 38% of national demand for ammonium nitrate because the government only granted it $425,000 a month in hard currency when it required $2.8m monthly to import ammonia gas.

That will not change until “as a country, we restructure our debts and pay our arrears,” says Mutasa. Until then, his holding company Masawara will use the revenue streams from its property, telecoms and tourism companies – especially hotels in Botswana and Zambia – to keep the manufacturing wing strong.

The Africa Report: There have been huge ­political changes in Zimbabwe. How does the business com­munity see things?

Shingai Mutasa: First and foremost, I think the most critical thing somebody must understand is that the mandate that runs our country has changed, and it’s a big change. […] I believe that our leader is committed to the transformation of this economy, I truly believe so. So those are fundamentals. Once you believe that, the opportunity for any investor – from infrastructure to mining, to agriculture, to health, to services – is mind boggling. […] And I would say to any international investor, you’ve got to come and visit Zimbabwe because when you are here, you begin to realise that the megaphone that talks of doom and gloom of this country is misdirected.

What is the future of agri­business in Zimbabwe, given its history?

I think there are several spaces that need to be managed. One is land itself. We have to quickly move past the issue of land and its ownership structure. We now have a very clear position where there are some assets which are still freehold, but a lot are going to be driven by leases. […] So I believe that is the first thing, because once we have that it means people will have title to land, whether lease or freehold, and can now create value which can go into the banks and allow the banks to create loans to support these leases, to support agriculture.

One of our businesses is fertiliser manufacturing. Historically, we used to use a system of electricity [to make ammonium]. We now are importing the ammonium and then converting it and manufacturing ammonium nitrate.

We believe our competitiveness will add significantly to the development of agriculture. When our country is able to produce the bulk of its inputs […] our competitiveness and the ability of our farmers to act quickly and produce more efficiently becomes heightened.

So one of the first statements that our president gave when he took over the presidency of our country, he said we must now move forward. Do not look at the farmers as white people or black people, Indian people, Chinese people, but look at farmers as Zimbabweans who want to contribute to the agricultural development of our country.

How does Sable Chemicals manage to sell fertilisers given farmers’ lack of capital?

We are trying to find a way of reducing the cost to the end farmer. […] At the moment, unfortunately, that price is way out of scale with what it should be, and by having a strong Sable producing I think we’ll be able to help with the reduction of cost to farmers. So that’s very important for us. I have a very good leadership at Sable, very focused. They have gone through some incredibly difficult times to reposition Sable.

What is the market size relative to your production?

The market is very significant. I think when Sable is producing to its current market potential, it’s about 240,000tn. That would just about deal with the market size in the next two years, we think. So already we are thinking of creating new production capacity so that we produce 240,000tn of ammonium nitrate and then start producing some urea as well. But again, we think the more we can produce some of these goods in Zimbabwe the better it would be for our country.

What is holding it back?

One of the most important things is we have to have sustainable currency in order to produce. Now, people will ask why should government support Sable with currency? The reality is that out of every dollar that you use to import fertiliser, if you use Sable you save 40% of that dollar. That’s a big economic saving to our country, and we have proven it to our leadership and to our country. With that kind of savings, we believe it will be extremely important for us to put more energy into the development of Sable Chemicals.

What has the currency crisis done to your business?

The shortage of currency is something that continues to happen and will continue to happen in our country until we are re-engaged as a member of the global community. So we as a country have to do certain things. We have to pay our arrears. We have to restructure our debts both local and foreign, and for the first time our political leadership have agreed that the minister of finance must go to the Paris Club to negotiate a restructuring of the debt.

The reality is Zimbabwe does not currently have a currency, and unfortunately, because there is lack of confidence, it is going to be very difficult for us to build a currency unless we settle on a real time frame, three years from now, four years from now […]. We have to do a lot of work to build that new currency.

How are you targeting the region?

Do you support the creation of a free trade zone across Africa?

I think a free trade zone for our continent is very important. I think our continent is so insignificant in the world trade space at this point in time, we have to begin to think how we would become important as a player in the world industry. And if we can begin to build a stronger relationship among African countries, that for me is first prize, without question.

But having said that, there are certain industries in each of these countries that need to be nurtured and protected and grown, and we should make sure that whatever agreement is signed, it does not mitigate the need to nurture specific competitive assets that a country might have. So I think that for me is important.

If I look at Zimbabwe today, it is critical for us to develop an iron and steel capacity […], but if South Africa wants to dump its product on Zimbabwe, it can do so easily. So we have to figure out how can we protect the development of iron and steel in Zimbabwe while we are part of a free trade relationship with our brothers and sisters across the continent.

If you don’t do that, then you have the possibility of completely destroying sectors that need to be developed. Beyond iron and steel, [there is] fertiliser, […] but it could also be the development of beneficiation of our mining products. Specifically for me, it would be making sure that we nurture the fertiliser industry. It can be a regional business, and we’d like it to be nurtured as such.